Due to the celebration of World Environment Day, numerous events have taken place throughout the month, specifically the last 5th and 6th of June, Novapet attended two of them organized in Madrid around the same issue that keeps in suspense to all companies in the sector: the circular economy of packaging.

In both it was clear that to achieve sustainability we must leave behind the linear economy, for which we have to collaborate all system members, and that PET is one of the materials with greater potential, present and future, to achieve the ambitious objectives that we have ahead.

On June 5, the Circular Economy Summit took place, a summit to rethink the plastic economy and accelerate the transition to the circularity of packaging that was organized by Aguas-Danone, Spain. 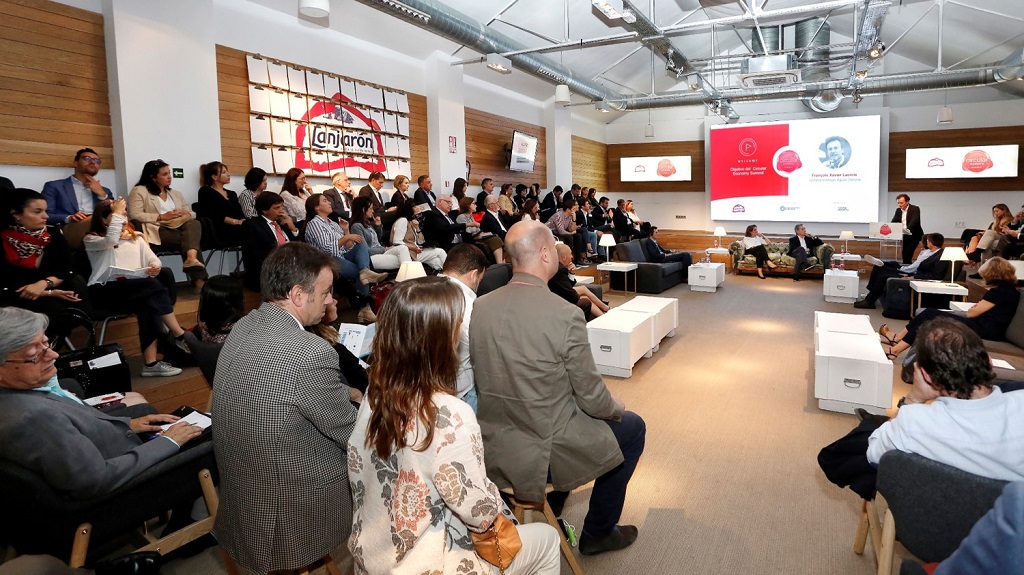 The central axis of the meeting was, waste or resource? Before the great stir that this question raises, since before, the waste was nothing more than waste of the activities that the man developed, and they had to be separated or hidden, since they had no value, now, on the contrary, in the recent years, recycling has taken such an important role at the environmental level that its value, as resources is on everyone’s lips. 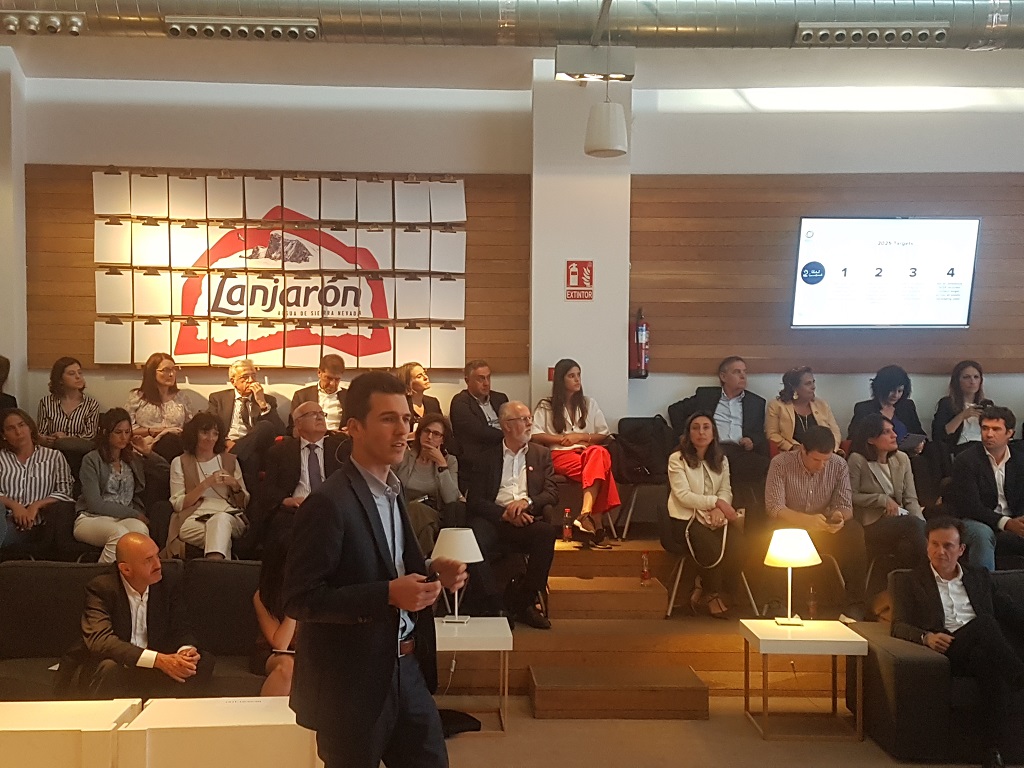 The event was attended by the main companies of the sector, clients, competitors, suppliers, NGOs, journalists, artists and public officials, and the main conclusions reached in this meeting are that circularity is a collective challenge that requires the commitment of the whole system, above the ideological positions and the competition.

As noted by François-Xavier Lacroix, General Manager of Aguas Danone Spain, “companies have capillarity, governments, capacity; the media, the truth; the NGOs the requirement; the citizens, the legitimacy that their acts grant. “

“The future of our sector is going through an industrial transformation that will follow a sustainable container market, manufactured with 100% recycled materials. Nowadays, the demand for recycled PET is much higher than its supply, which generates inflation that hurts the development of the model.” 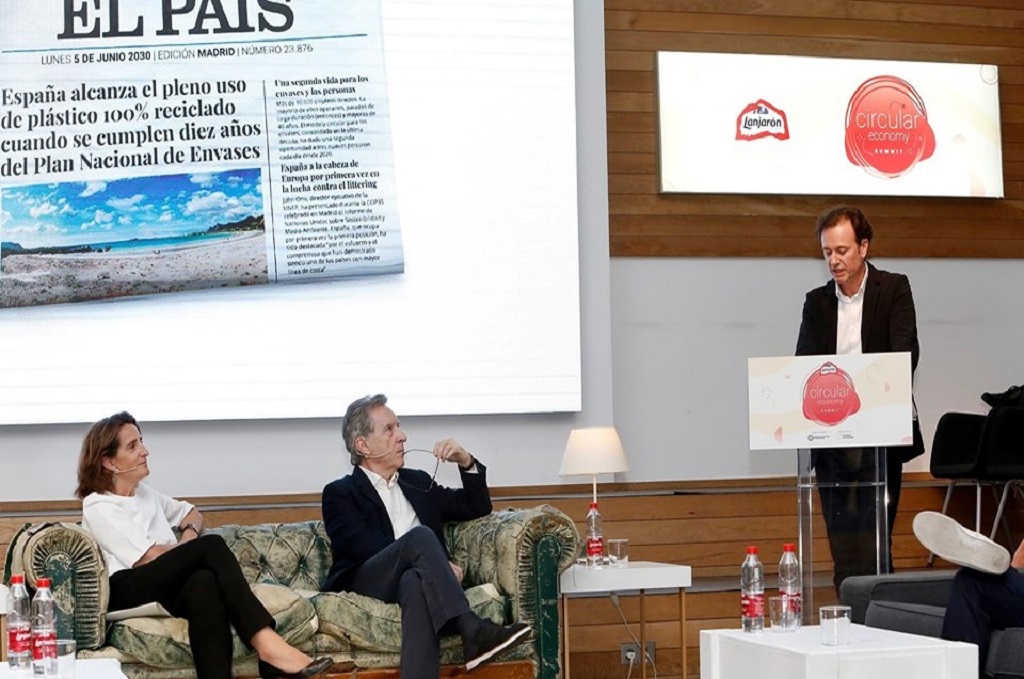 In turn, in the presence of Teresa Ribera, Acting Minister for the Ecological Transition, it was noted that PET, 100% recyclable, is the best material to achieve this circularity, and requested legislation that allows and favors reaching the objectives.

The journalist Iñaki Gabilondo was chosen to moderate the event and to present the speakers. In his first speech, he sent a resounding message: we were wrong in the question, the question we should ask ourselves is not:  what is going to happen? But rather: what are we going to do to prevent this from happening?

The central presentation was given by Sander Defruyt, from the Ellen MacArthur Foundation, developer of the “New Plastics Economy” initiative with the vision of favoring the creation of a circular economy of plastics, in which they never become waste. To achieve this, they propose global commitments that have already been signed by more than 400 important organizations worldwide, and that Novapet shares fully. For this reason, we are initiating the formal adhesion process to this movement, as an expression of our strategic commitment to the environment.

All the participants agreed that the main initiative among all the agents of the chain, suppliers, producers and packers, should be to add knowledge, energy and resources to change things.

Here you have a video of the summit:

The next day at the V Meeting Alimarket Packaging solutions for mass consumption, various agents converged, among which there was an outstanding representation of leading companies in the consumer sector to talk about the strategies they have designed to achieve the circularity of their products.

The general concern of all the actors was latent, since, after the plan of sustainability approved in January of 2018 by the European Commission to confront the environmental problem generated by the badly managed plastic packaging, the companies are forced to transform the way in which packaging materials are designed, produced, used and recycled, generating new business opportunities with them.

That’s the key, the Circular Economy strategy tries to give value to the waste, that it can have a life and can be incorporated back into the production chain.

As highlighted at the beginning of the day Carmen Sánchez, Deputy Director of Itene in relation to the European plastics strategy, a series of actions are established in order to reformulate the role of plastics by establishing a calendar, with specific dates: in 2021 to eliminate from the market certain single-use products; achieve in 2025, that 65% of the packaging placed on the market is recyclable; and, finally, to ensure that by 2030 all containers are recyclable, compostable or reusable.

This calendar has been the impetus that many companies needed to react and take serious measures in this regard. In fact, she pointed out that “it has put the whole industry in alarm, but affirms at the same time that there is time to accomplish both, manufacturers and packers.”

There are many responsibilities that agents have to face and develop, but the most visible concerns packagers, since they must analyze their packaging and decide one by one what strategy they have to follow according to their specific needs.

In this direction, Carmen Gómez-Acebo, leader of the Sustainability area of Coca-Cola European Partners in Iberia, expressed her global circular strategy, with three relevant objectives for 2025: use only recyclable bottle-bottle or reusable containers, collect the equivalent to 100% of the containers put in marked and that all his containers contain at least 50% of recycled material, reason why they trust in the PET like one of the most important materials to reach them.

All of us there had in mind that plastics and packaging are not the problem, but its inefficient management in some cases. In a world in which the population grows, so does consumption and with it, waste, to which, we must give them a value and incorporate them into the business.

We can think that ecodesign is a key model, that makes lighter packaging, uses more sustainable and reused raw materials. But the circular economy is not only a subject that corresponds to the companies, but also to the consumers and to the Administration. In addition, “the circular economy is an opportunity to generate employment and social inclusion,” said Borja Lafuente, from Aguas Danone.

Today no one disagrees that what PET packaging producers need is to increase the collection of post-consumer packaging so there will be a sufficient secondary market for rPET, which requires that the administrations and agencies involved invest in it, educating and encouraging the recycling of the end user. This is, undoubtedly, the key to the success of the circular economy.

Ana Fernández de Klökner Pentaplast, put special emphasis on food security. “We can not forget that we manufacture containers, whose function is to protect. Faced with the current of elimination of plastic that is currently in society, we have to ask ourselves if we are willing to pay the toll to put at risk the food security of families.”

Additionally, he wanted to emphasize the difficulties involved in achieving a perfect Circular Economy: “to make 100% of the used materials recyclable within a few years seems, to this day, practically impossible because it implies that each element of the chain works perfectly. In this sense, it is very important that we understand the role of the consumer. The end customer has made us participate in what he wants, that there are no plastics in the seas or in the environment, but now he needs to understand what is his part in this process, that he is really involved in this process. That, if a more sustainable package arrives but that at an aesthetic level is not perfect, because it has maculas or colors that do not seem so clean, do not reject it. “

Training and education will be essential to achieve this goal and there we will be the PET producers to help make this possible.